Redesigning Pinterest's "Tried It" for greater discoverability and use

Pinterest's "Tried It" feature allows users to keep track of ideas they found on Pinterest.

As a personal design challenge, I wanted to redesign a feature of a popular app. The app I chose was Pinterest, a mobile app that is often used to save photos, media, and ideas for personal use and interests.

I use Pinterest fairly often, so I feel that I was comfortable enough with the product to be able to navigate and consider its features. In particular, I wanted to study and redesign Pinterest's "Tried It" feature.

The Tried It feature allows users to keep track of ideas they found on Pinterest. Users can mark Pins as they try them, explore Pins where others have tried the idea, and access everything they have tried in the past.

I conducted 7 interviews (in-person and phone), in which I asked participants about their Pinterest usage and familiarity. From the interviews, I extracted some common themes surrounding Tried It.

Mobile majority
Almost every participant stated that they prefer using Pinterest through their phone over other means. I narrowed the scope of my redesign to Pinterest's mobile platform.

How might we redesign the Tried It feature to be more discoverable across Pinterest's mobile app?

With my research findings, I suggested ways that the “Tried It” feature could be redesigned to be more readily discoverable for users.

Increase visual prominence
Due to low familiarity, users don’t know where the features are located on Pinterest. The features are not hidden, but they don’t make themselves known to the user.
‍
Modify tried marking on pins
Users expect that marking a pin as tried will also visually distinguish it from other pins. Pinterest does mark tried pins already, but the visual marking is a bit too subtle.

Create board view of tried pins
Marking a pin as tried creates a section titled “Tried” in a user’s profile, but the section is not an actual viewable board. The proposed board view gives users another option for viewing their previously tried pins.

Filter search for popular tried pins
Similar to reading online reviews of products – allow the user to explore pins that have a high success rate of execution by other users.
‍
Restructure “About this Pin” module to prioritize Tried It
“About this Pin” is reached by tapping on the Tried It feature on individual pins. The module contains other boards where the particular Pin is saved. Instead, the module should prioritize content from notes and reviews left by users that tried the pin.

I started sketching out my vision for each design recommendation. For each recommendation, I sketched the current layout on the Pinterest mobile platform against my proposed suggestions for comparison. 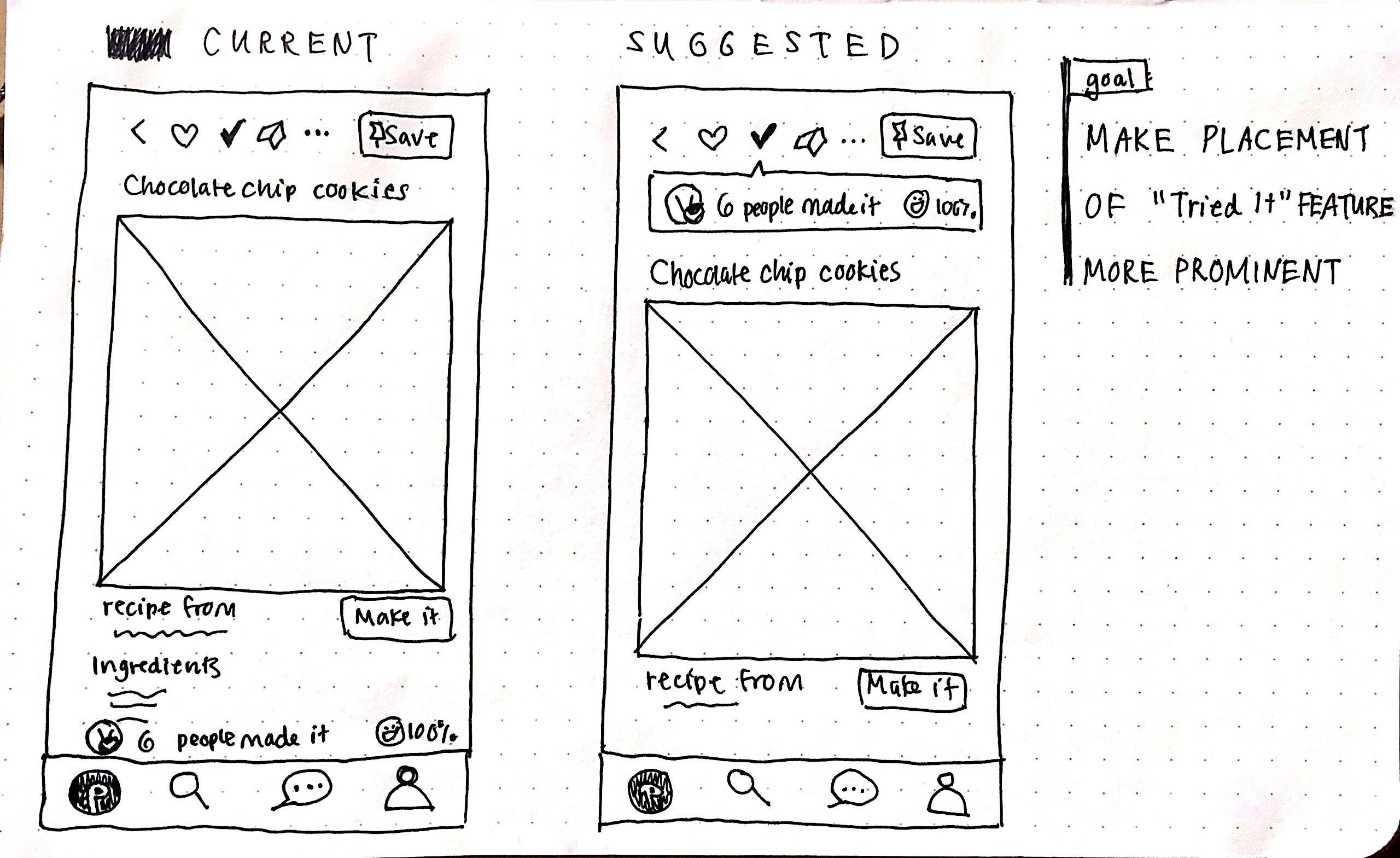 3. Create board view of tried pins 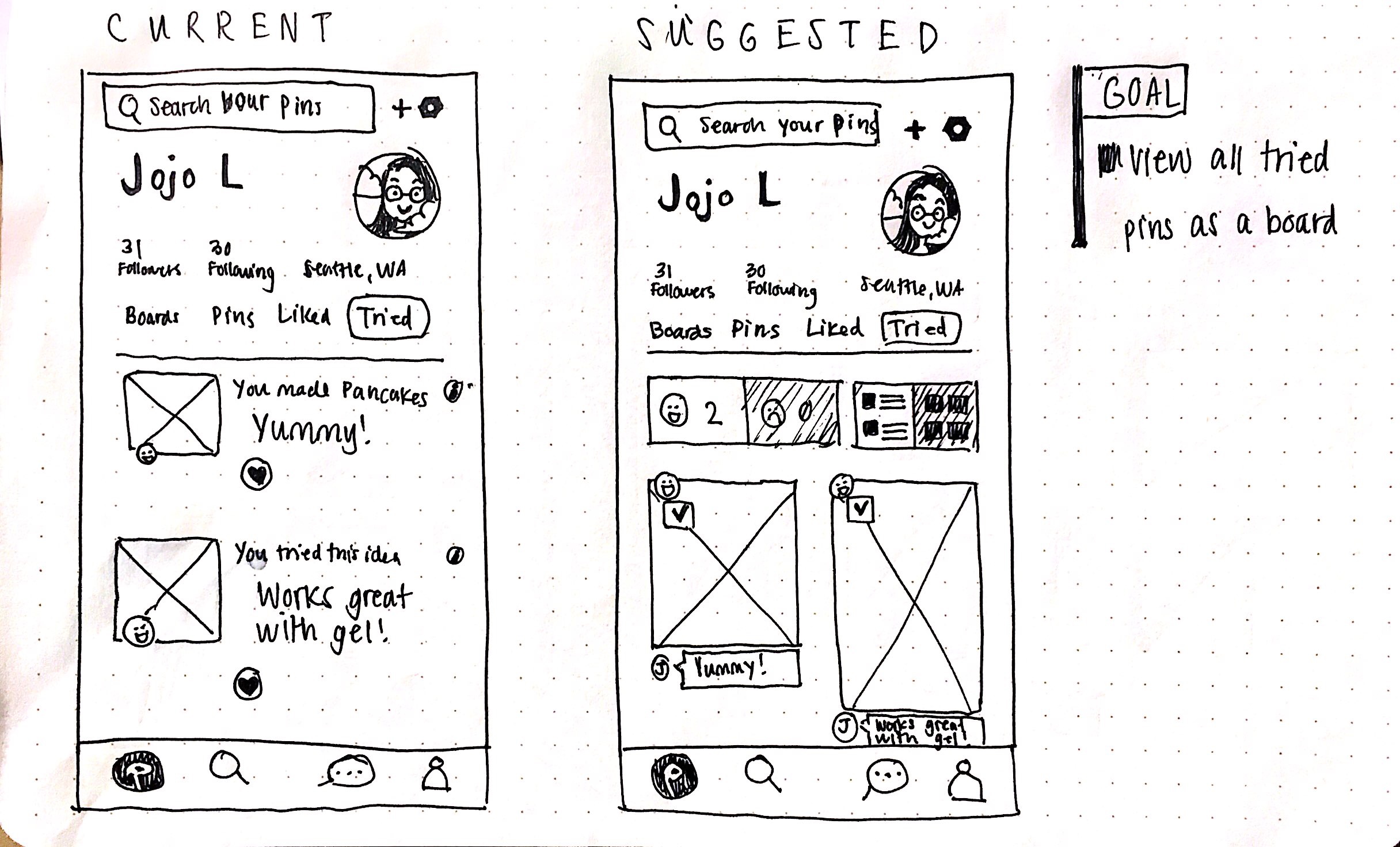 5. Restructure “About this Pin” to prioritize Tried It 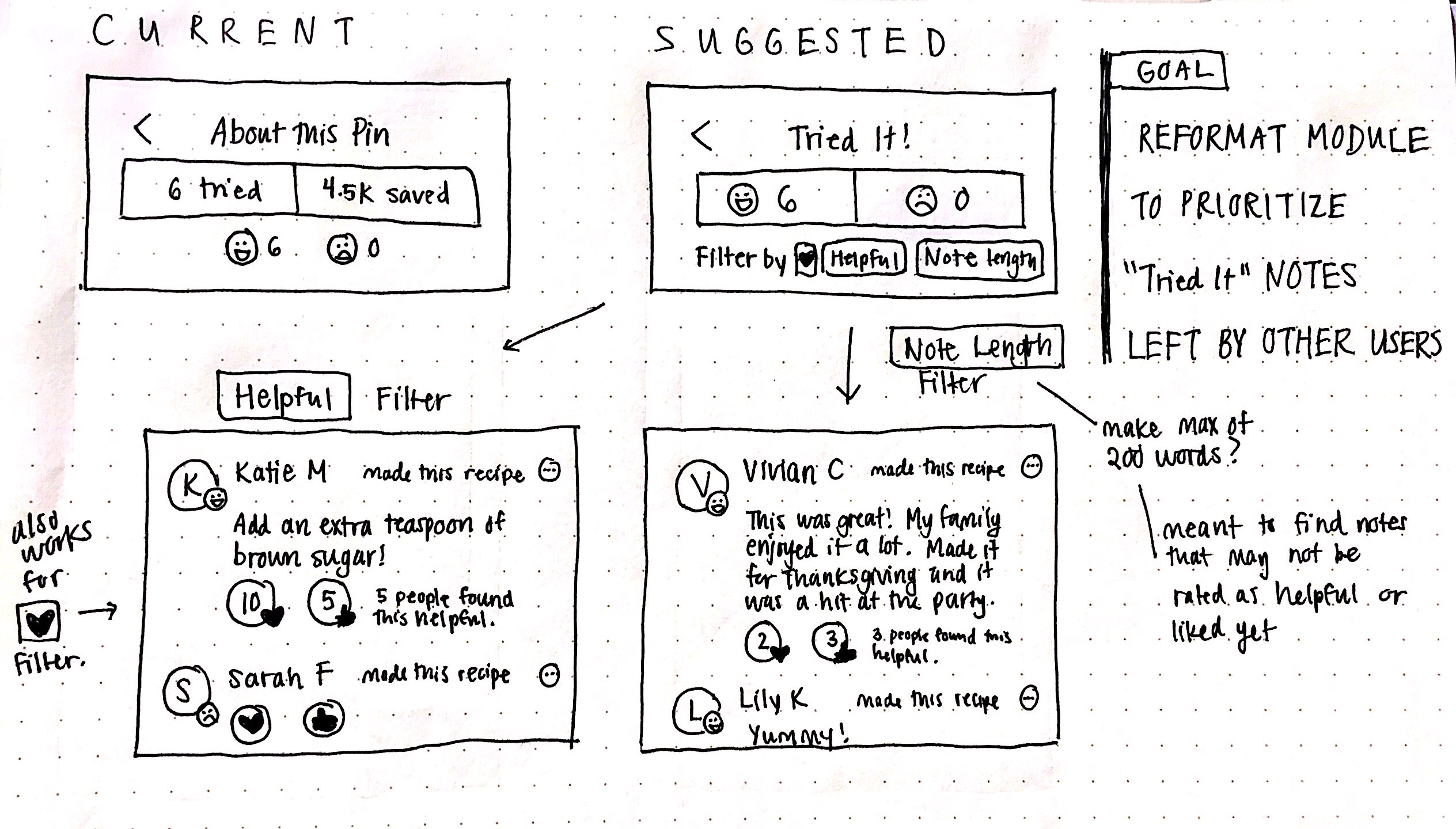 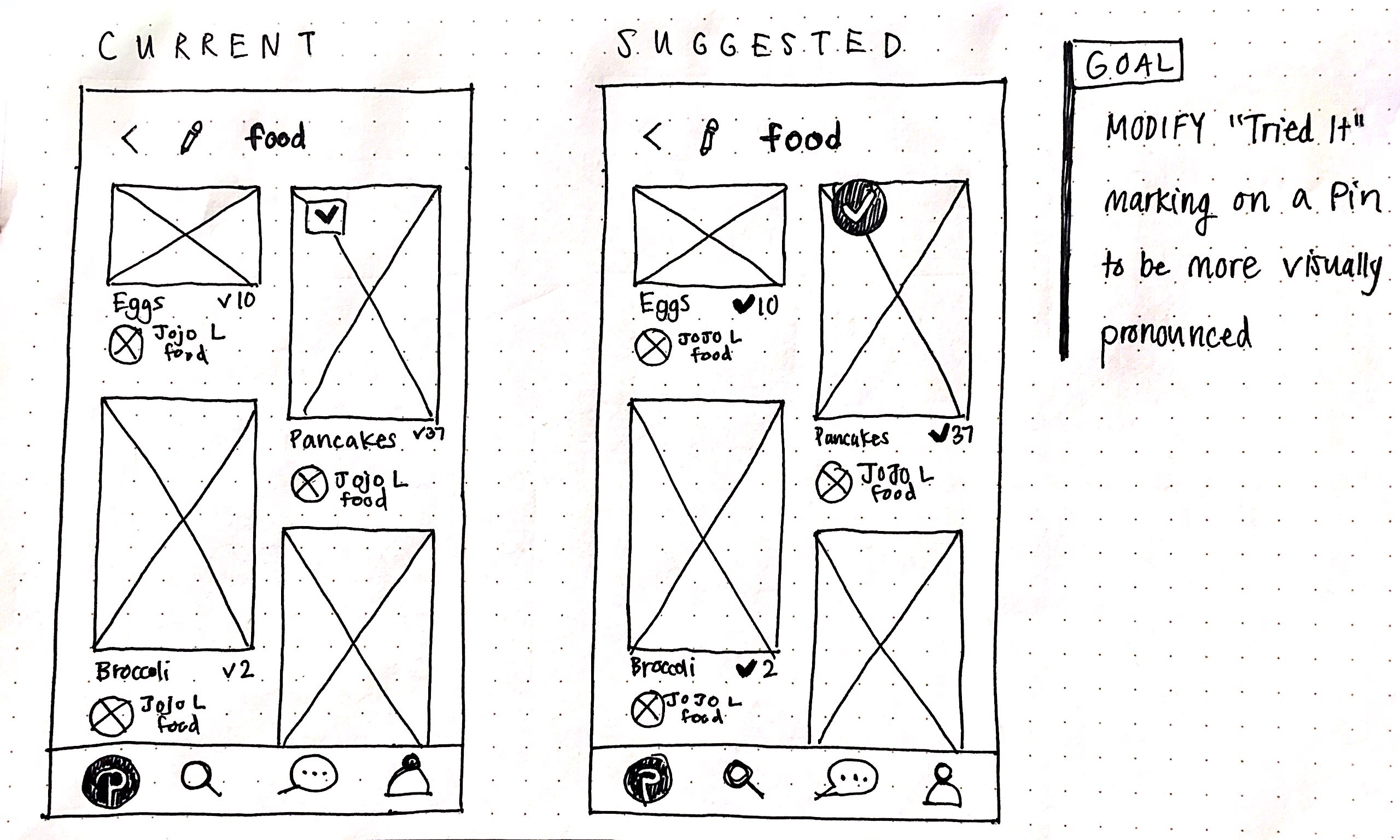 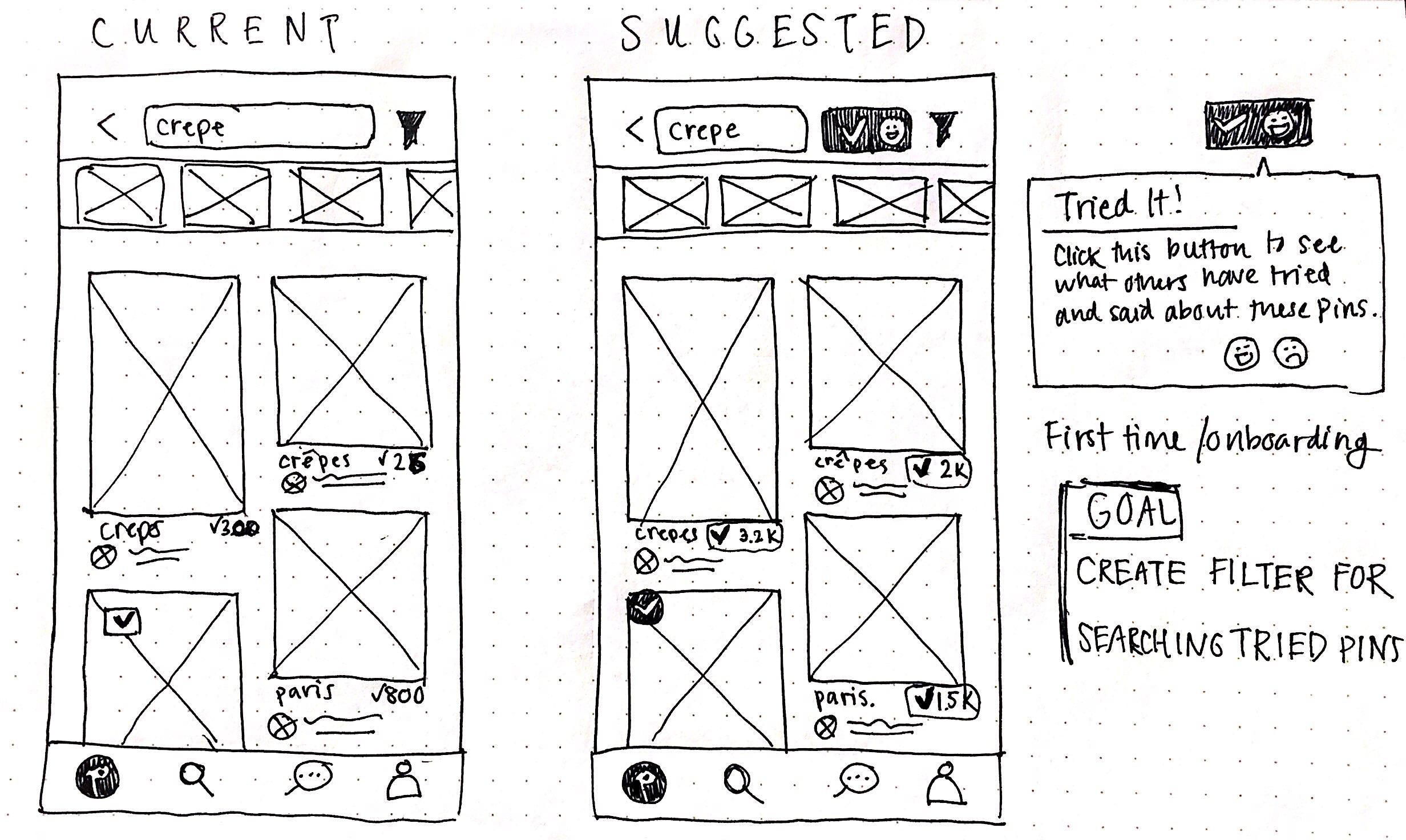 Taking my earlier sketches, I finalized the designs and made higher fidelity mockups to show how my recommendations would manifest in the real Pinterest mobile app.

Tried It on Pins

Tried It too low on pin page

Tried It moved to top of pin page 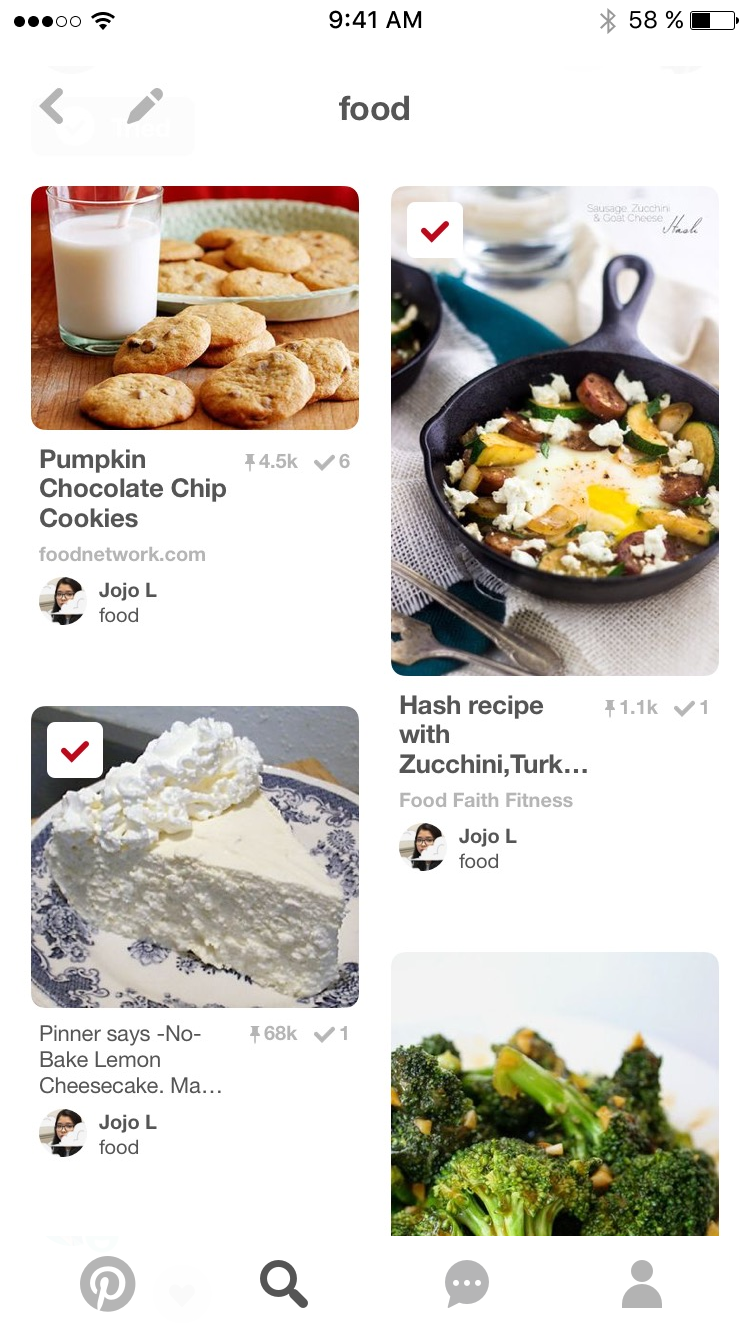 Markings are more visible on images
Markings blend in with images 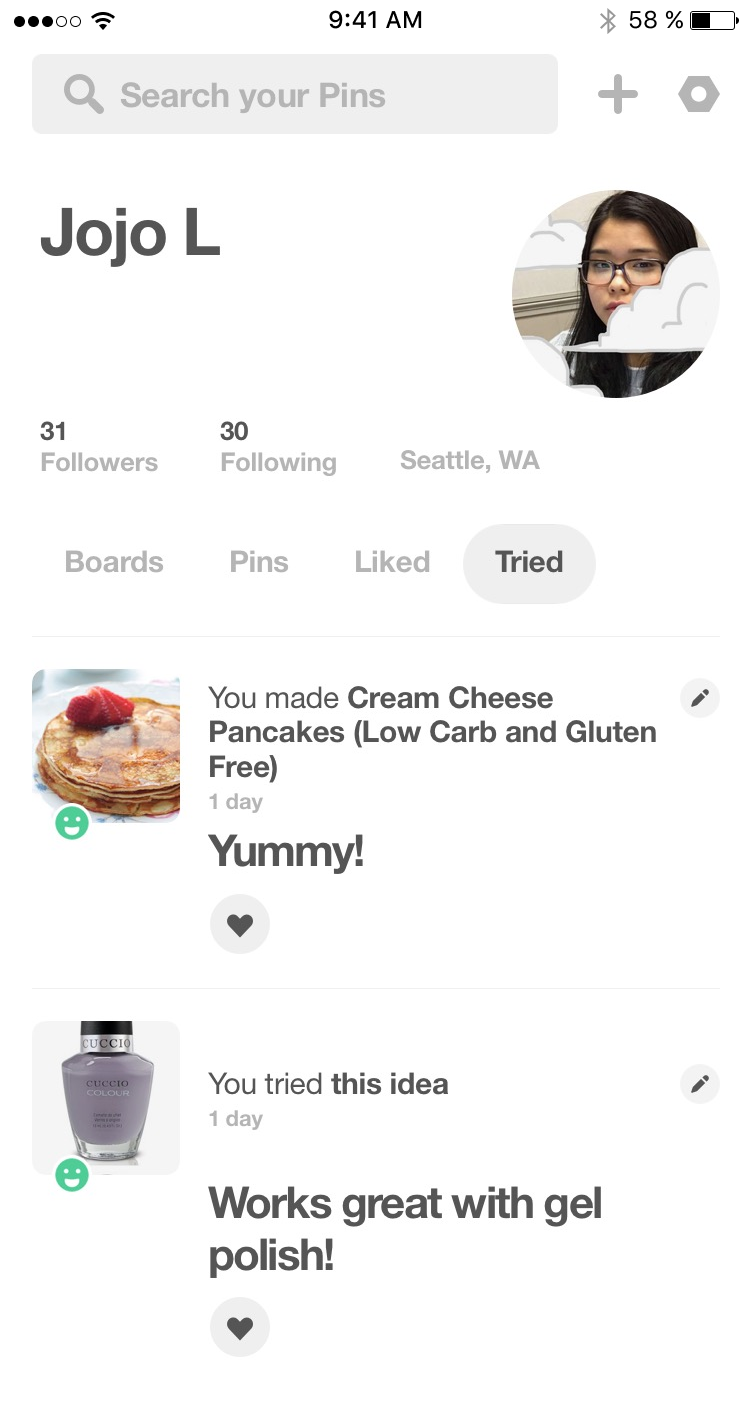 Toggle between list/board and preferences
Only list view on profile 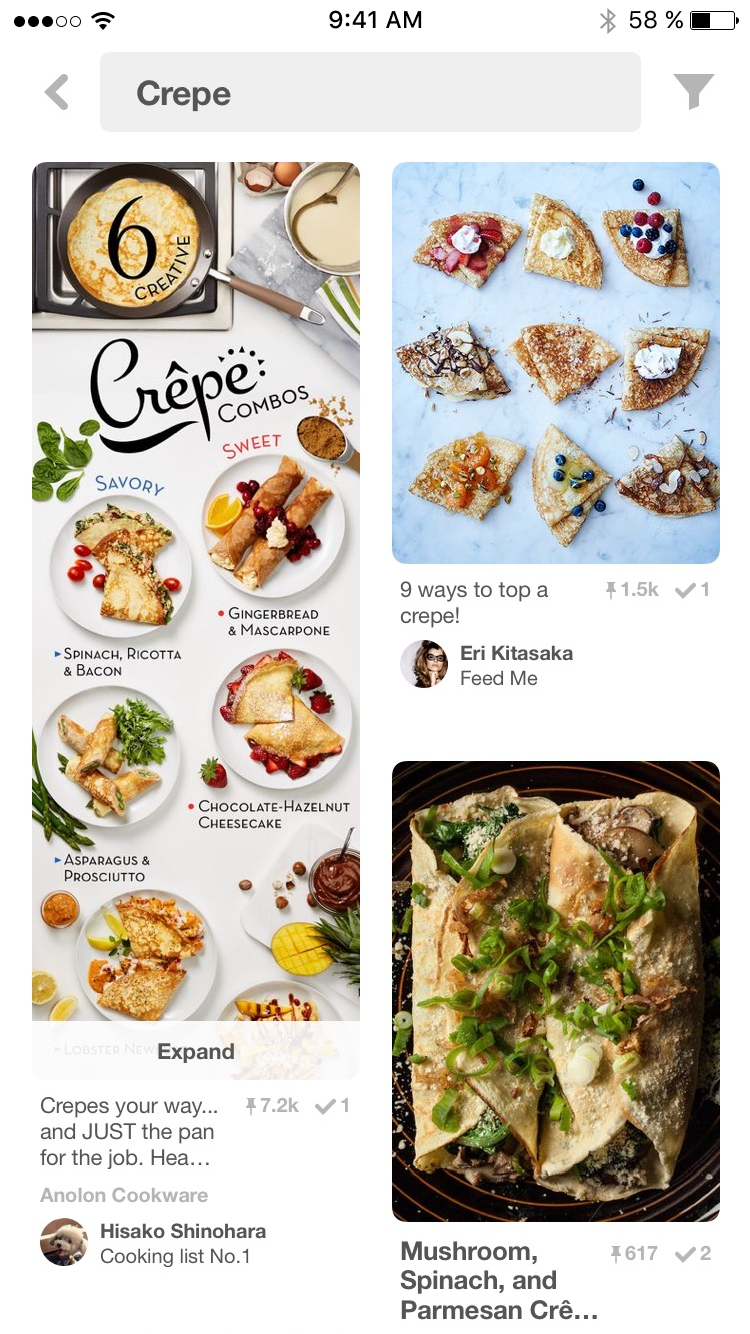 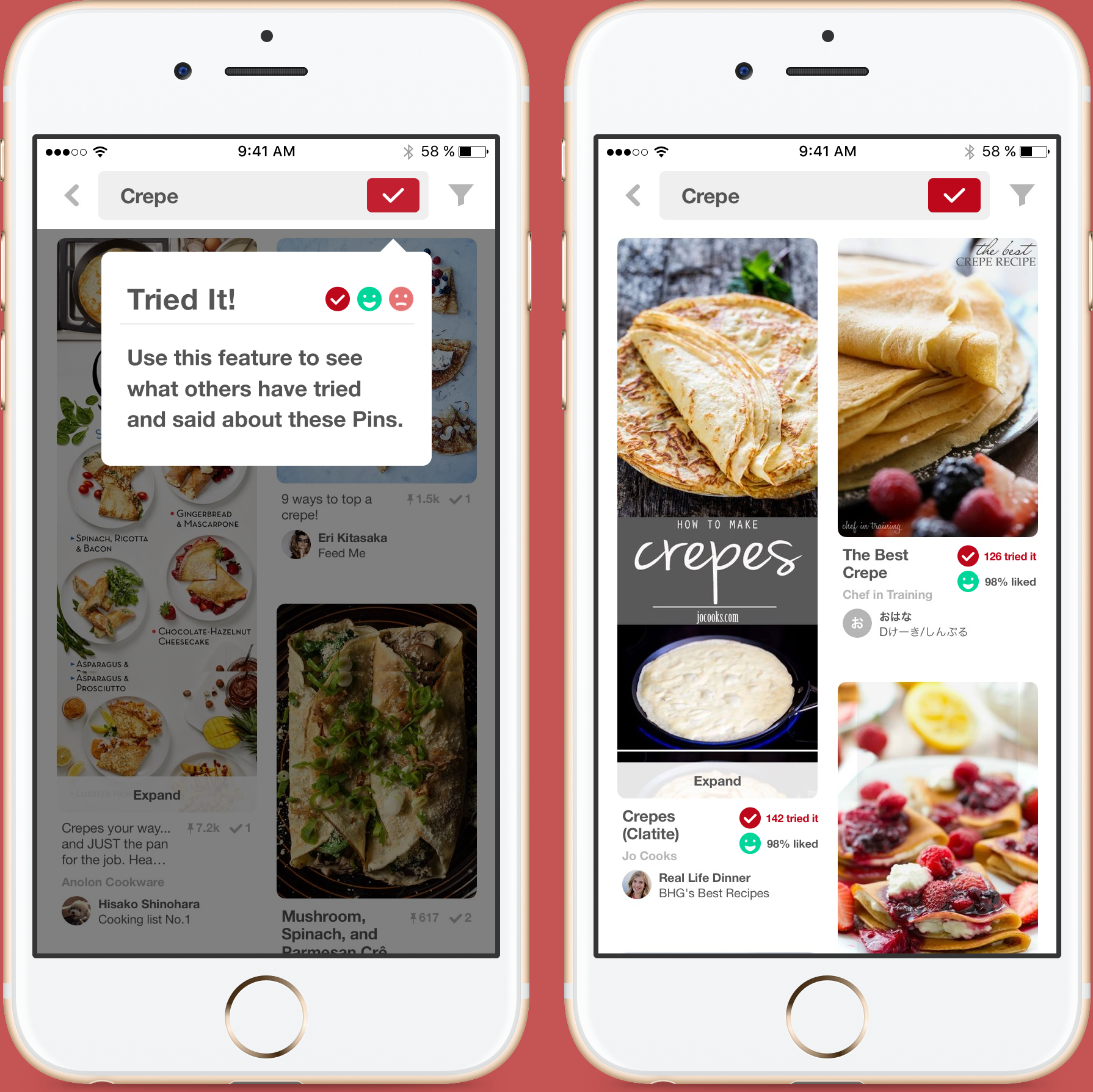 Recommendation 5: Restructure “About this Pin” to prioritize Tried It 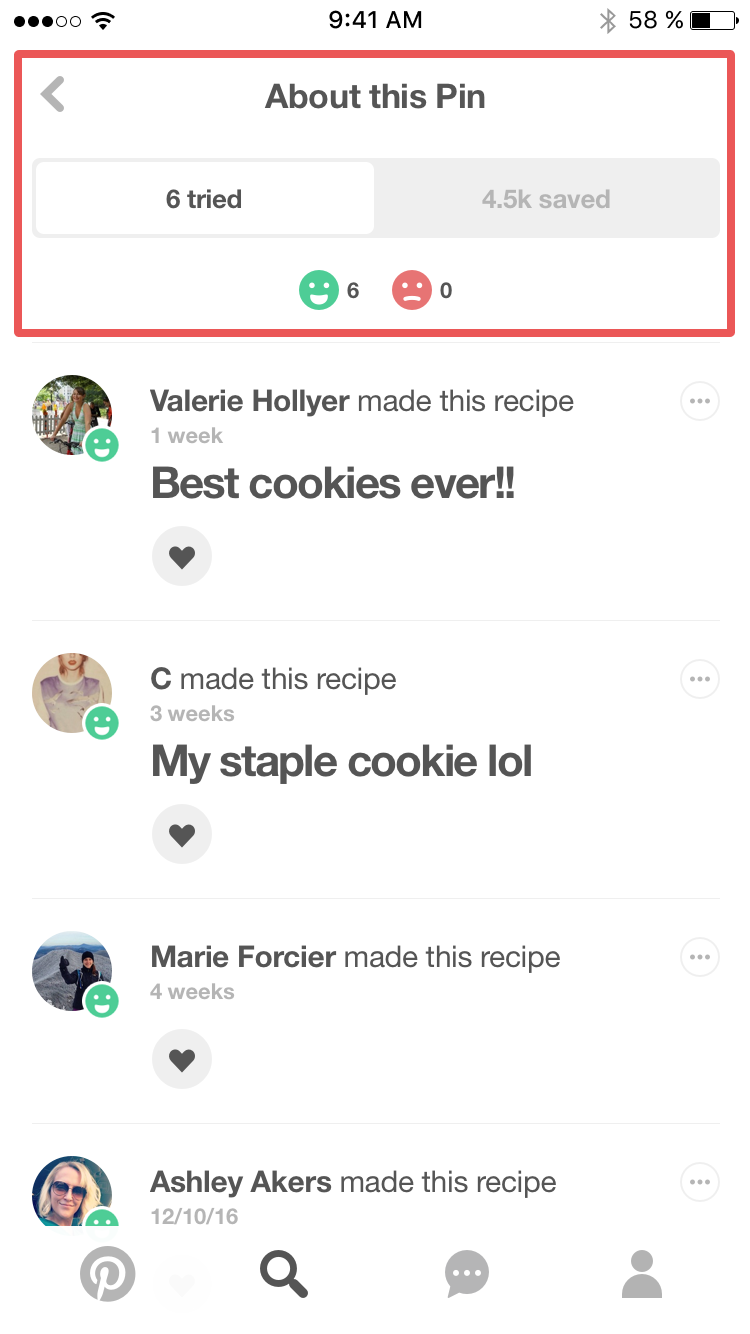 This was my first personal redesign/case study! Here were some takeaways I had.

Respect the brand–it exists for a reason.
A lot goes into enforcing a brand across an entire platform. I liked that I had an existing brand to work off of, and it helped me gain a deeper appreciation for branding.
‍
Be proactive with user research efforts
‍Since this was a personal project, I planned and carried out everything on my own.
‍
Tools are temporary, but skills are forever
This was my first time using an interface design tool (Figma). The skills I learned in this process naturally led me to discover and pick up other design and prototyping tools.

Something I would do differently next time is that I would keep up with the feature over time to see how it changes and adapt my redesign. I would also make interactive prototypes and test with people to inform a potential future iteration.